News and Views from the Central Drakensberg
Winter 2020
Book Now...click here
In this Issue >>>

Click here see images
The Impact of the COVID-19 Pandemic
It has been a torrid time for the world over the past few months, and the tourism industry has been particularly badly hit. At the time of writing the lockdown was still in force, but hopefully, this will be lifted soon, and we can start getting back to some normality in our lives. One good thing as South African is that we have a beautiful country and what better time to start exploring than now. At Wits End we will be offering some attractive start-up special for extended stays in some of our chalets. It seems that the COVID-19 virus will be around for some while yet so our specials will enable guests to self-isolate in their well-spaced separate chalet and enjoy the open-air facilities of our 80-hectare property. The resort has a magnificent view, and we have an extensive network of trails passing through an indigenous forest and along grassland paths. There is also a large lake with fishing and boating. We will also be taking extra precautions to protect our guests and will expect our guest to be considerate of other guests in our communal areas.
One of the specials for May and June is for the bookings of fourteen days or more at R440.00 per chalet per night. This special is offered in one of our four sleeper two suite chalets or a six sleeper, three-bedroom, and one bathroom family chalet. This offer is subject to availability and terms, and conditions apply. You will need to book directly to qualify for this offer by phone 036 468 1133 or info@witsend.co.za.
Book now...click here
Winter,
the time for relaxation and reflection in the Drakensberg

The Drakensberg is one of the few areas in South Africa where you can experience and feel the district difference between the four seasons. The chill of winter tends to come slightly earlier than the official commencement date of the 21 June and extends slightly later than the 22 September. It converts the lush green landscapes of this rugged mountain range into various hues of brown. These turn to beautiful shades of orange and pink as the sun rises later in the morning and descends earlier in the evening. 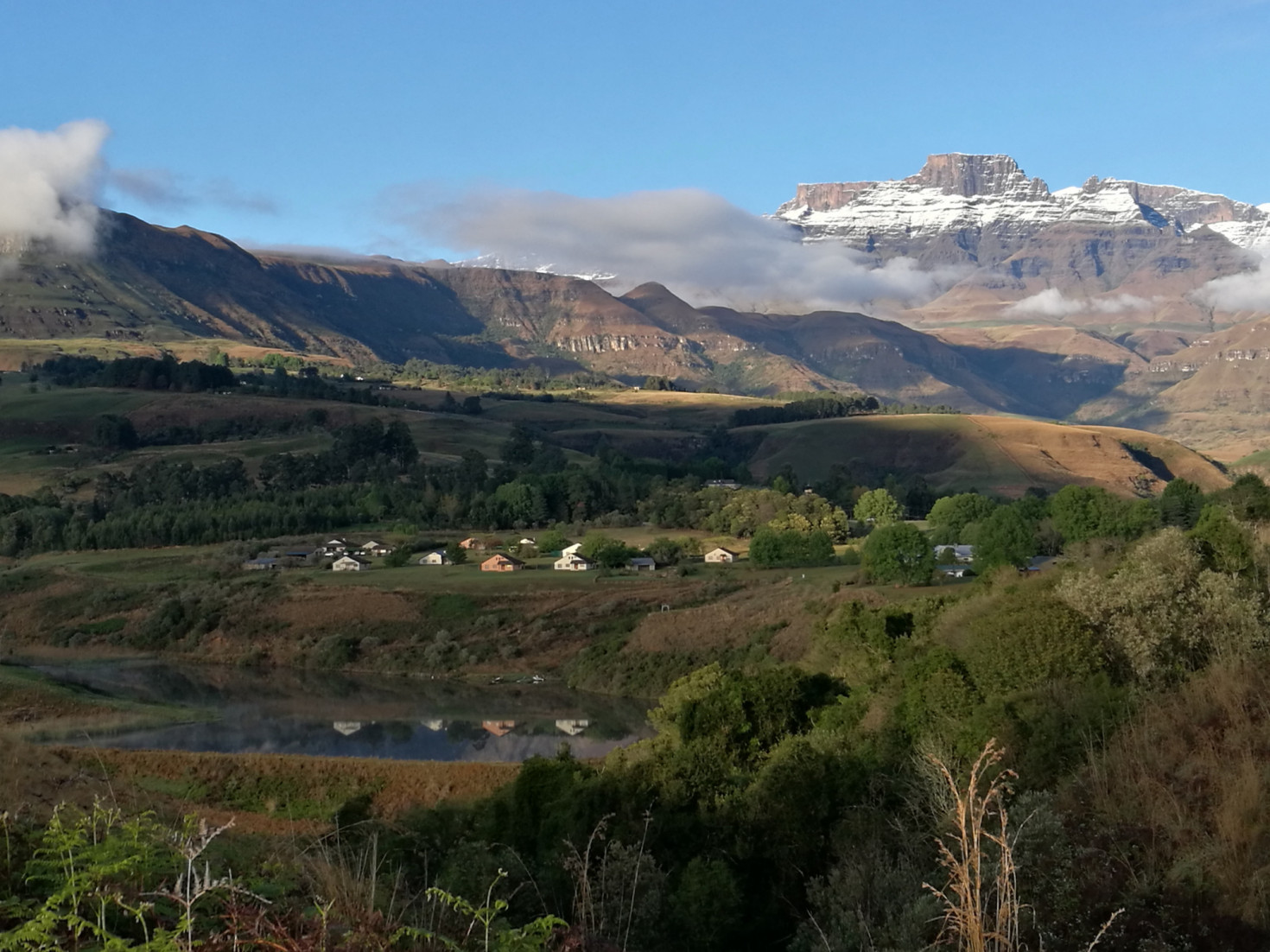 Early morning is a 'frosty affair' when the grasslands turn white, and you can hear the distinct crunch of ice beneath your feet. It is a magnificent scene to behold.

The period between mid-morning and mid-afternoon are relatively warm. This is a perfect time to take a long walk or hike along one of our many trails in the Champagne Valley.

Evenings are times to cosy up with your family or loved one in front of a crackling fire. To play board games, to eat a hearty meal, with a good bottle of red wine, read a good novel and relax and sleep in a little later than usual.

You may also be able to experience the wondrous sight of snow on the high peaks of the Drakensberg. Or the marvel of an unusual snowfall at a low level. These are always festive occasions when families build snowmen and snowball fights are the order of the day.

So, book now at Wits End to experience the wonder of winter in the Drakensberg. 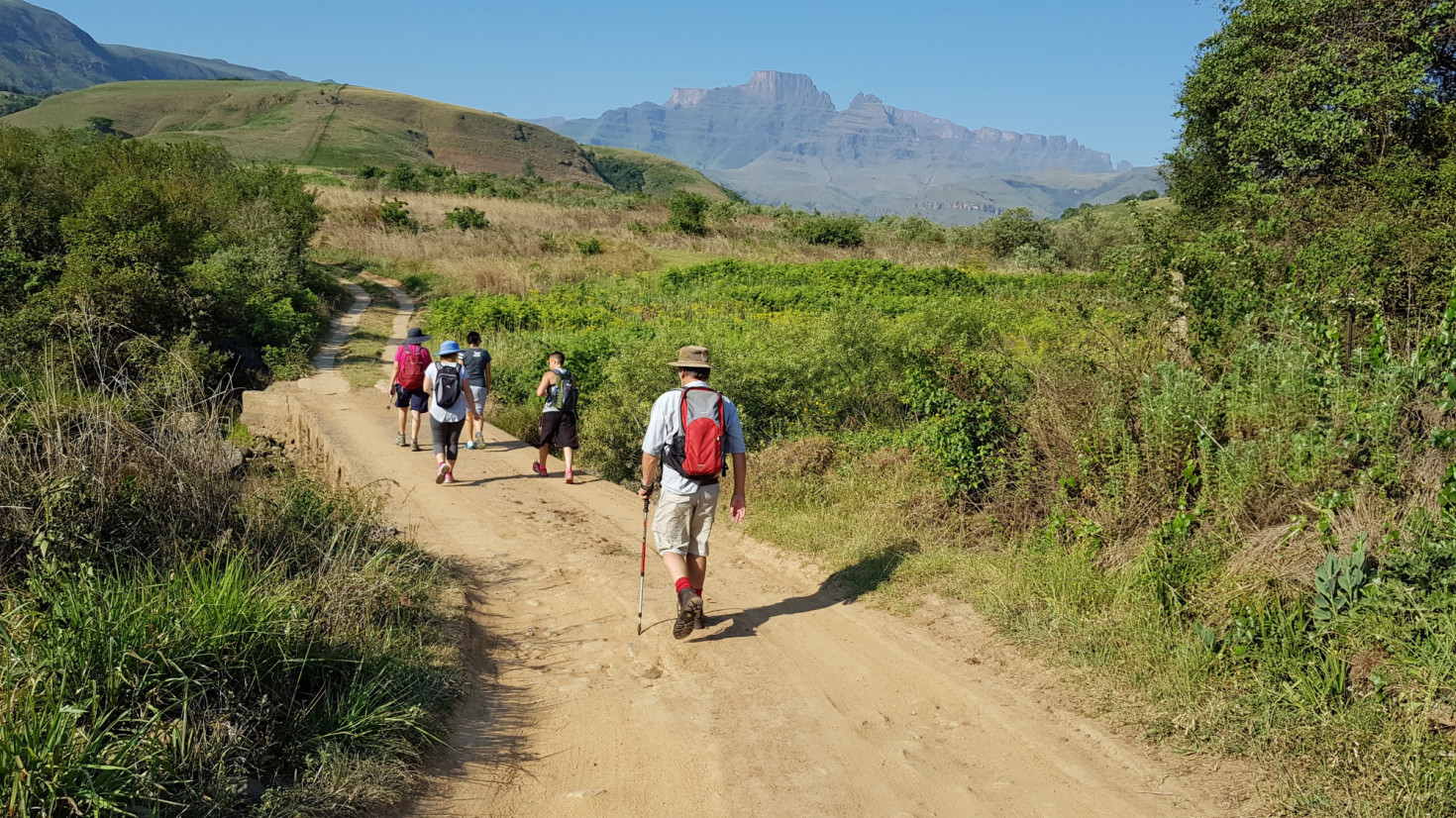 There are a wide range of activities and experiences of the Drakensberg and surrounding area for leisure tourists, incentive groups and conference delegates. Therefore, there is no reason why you should not have an active experience in the Drakensberg. Activities and experiences of the Drakensberg and surrounding area range from:
• helicopter flips over the Drakensberg:
• hiking;
• hot air ballooning;
• golf:
• Scootours;
• motorbike scrambling;
• trail running;
• parkruns – in Northern Drakensberg and at the Waffle Hut;
• regular events;
• mountain biking and circuits;
• bowling – especially at The Nest Hotel;
• paintball;
• gliding;
• para-gliding;
• a chocolate factory;
• tennis;
• visits to San rock art sites and museums – Main Cave at Giants Castle, Didima Rock Art        Museum and Battle Cave at Injisuti;
• The reptile centre;
• Falcon Ridge bird sanctuary;
• swimming;
• bee and honey tours;
• bird watching;
• fishing at locations such as Wits End;
• mountaineering and so much more…
The Polar Bear Swim Challenge

The Drakensberg Polar Bear Swim Challenge is an annual swim that takes place every year in the Champagne Valley area, of the Central Drakensberg. It takes place on the nearest Saturday to the date of the Winter Solstice. The Drakensberg Polar Bear Swim Challenge started as a small challenge in the early 2000s at Dragon Peaks in aid of the Estcourt Animal Shelter. The event has grown over the last four to five years to support the Khetani Animal Rescue initiative. Estcourt Animal Rescue and Khetani Animal rescue receive fifty percent each of the proceeds in cash and kind.

This event was initially convened by Ann Gray, a prominent member of The Cathkin Park Community. Before that, she had organised this Challenge in Winterton for the Winterton Primary School learners.

Polar Bear Swims or “plunges” are not unique to this area. They tend to be held in the winter where participants jump into the very frigid water and swim a distance. In the United States, for example, polar bear plunges are mainly held to raise money for a charitable organisation.
What makes the Drakensberg so unique?
Book Now...click here
DRAKENSBERG SAN ROCK ART
A significant portion of the Drakensberg is a World Heritage Site. It is a unique area of 250,000 hectares. This destination received World Heritage Site status on two counts. Firstly, due to its unique vegetation and wildlife. Secondly, as a result of the fact that it is the world's largest repository of San Rock Art. More than 30,000 examples of their frescos are found in this mountain range.
Archaeologists concur that the San were descendants of the first Homo Sapiens Sapiens that lived in Southern Africa. They roamed freely in the area, especially along the coast. For examples remains of San or their forebears were found in Blombos Cave in the Western Cape some 70,000 BP.

In the South African section of the Drakensberg datings are some 8,000 years BP. They were hunters and gatherers. Their hunting techniques are particularly renowned. They used specially poisoned arrows to bring down their prey, but in such a way that the meat of the animal was not spoilt.


INTERPRETATIONS OF DRAKENSBERG SAN ROCK ART
San rock art provided both a literal or overview of the day to day activities in the Drakensberg and their spiritual beliefs. Shamans painted the more spiritual paintings after they had emerged from very painful trances, and depicted their visits to the afterlife. These paintings symbolised four essential aspects of their religious beliefs, namely:

Firstly, their belief that specific rock faces in rock shelters were a veil between the real world and the spiritual world. Often represented by a painting of an Eland emerging from a crack in such a rock face;
Water bodies, where they could engage with their ancestral spirits;
Dying, usually represented by a dying Eland; and
Lastly, the spiritual world represented by flying people and buck.
The San believed in three extraordinary spiritual beings, firstly, their ancestors, secondly, God and lastly, unusual animals. The Eland had the most spiritual relevance.

The San believed that their Shamans could communicate with their ancestral spirits and at the same time merge with animals such as Eland (“Anthropomorphism”). Humans that combine with spiritual creatures – “Therianthropes”. One theory is that Shamans paintings are very often, portraits of their experiences as “Therianthropes”. They also represented their experiences as being elongated beings.

Shamans often requested their ancestors for rain or to assist them in healing a sick member of their community.

Another belief is that these were images of San dancing with animal masks.

HOW THEY PAINTED
Their most famous paintings were first; those of Eland, secondly of Rhebuck, whom they believed could bring rain and lastly humans.

The rock art custodian should inform guests that they must not touch, alter, deface, bump against or stir up dust in a shelter. All of these variables can seriously damage rock art. They should also inform visitors of the religious significance of such sites, and that appropriate respect is shown when entering a site.

SAN ROCK ART SITES THAT CAN BE VISITED BY THE PUBLIC
The main locations for public visitation in the Northern and Central Drakensberg include Battle Cave, at Injisuthi Camp, Main Cave, at Giants Castle and Game Pass Shelter at the Kamberg Camp. Some 40 other open sites exist in the region. A rock art custodian must be present. 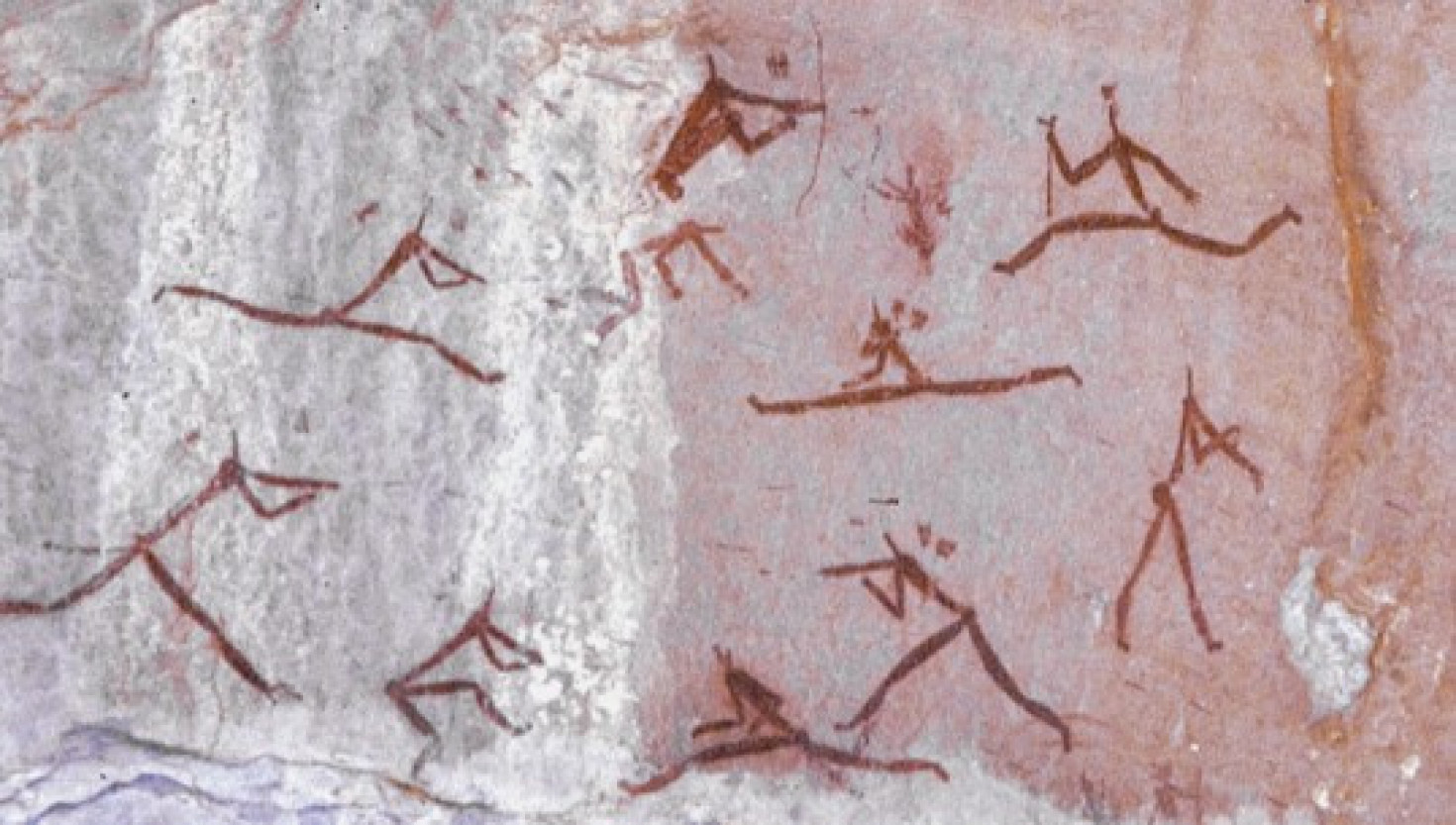 The most significant fresco in Battle Cave under the arrows in the top left hand side.
Winter 2020 Events >>>
(Source: Ann Gray)
Wits End
A Special Events Venue ...
The unique selling feature of Wits End is that it is an ideal Drakensberg Venue for weddings and other events such as family get-togethers, small conferences and retreats.


Individuals, groups or organisations can book out the whole resort for a function. The resort has a multi-purpose chapel and large hall, as well as a range of outdoor venues for, for example, an outdoor wedding or dinner under the stars.

·       Group chalets – 4 bedrooms two bathrooms-3 available
Wits End has two formal meeting or event venues and a series of outdoor facilities.
The primary function centre can do banquets of up to 150 people, and the adjacent multi-purpose building/ chapel can seat 150 theatre style.
Book Now...Click here 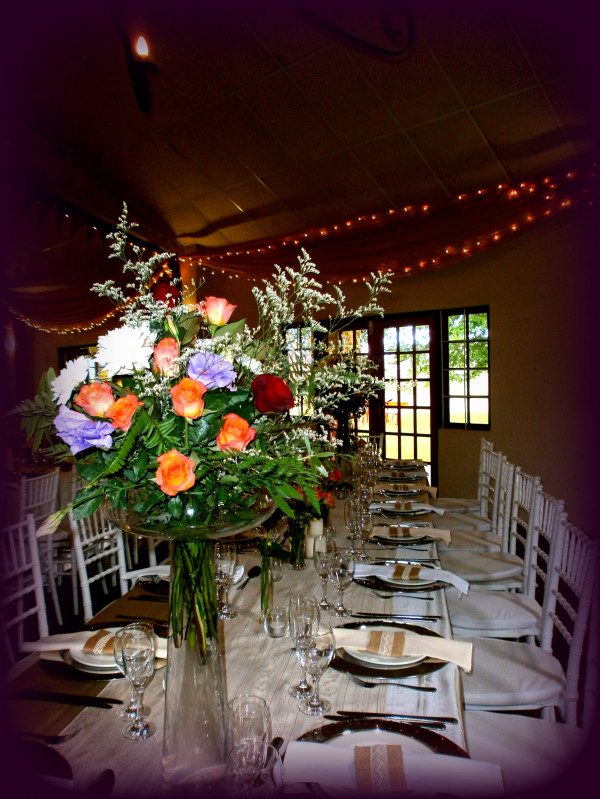 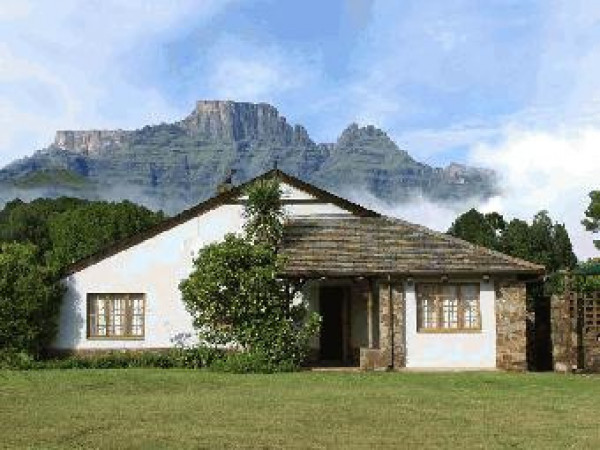 Specials >>>
10% pensioners discount on all stays except peak periods.
May to September longer stay specials for stays of fourteen days or more. R440.00 per chalet per night in a four sleeper, two suite chalet or a six sleeper, three-bedroom and one bathroom chalet.
To qualify for these specials book directly by phone 036 468 1133 or info@witsend.co.za. Terms and conditions apply.
Contact Us >>>
Book now...click here
Wits End Mountain Resort
Off R600
Central Drakensberg, Champagne Valley
3340
South Africa
https://www.witsend.co.za/
In the Next Issue >>>