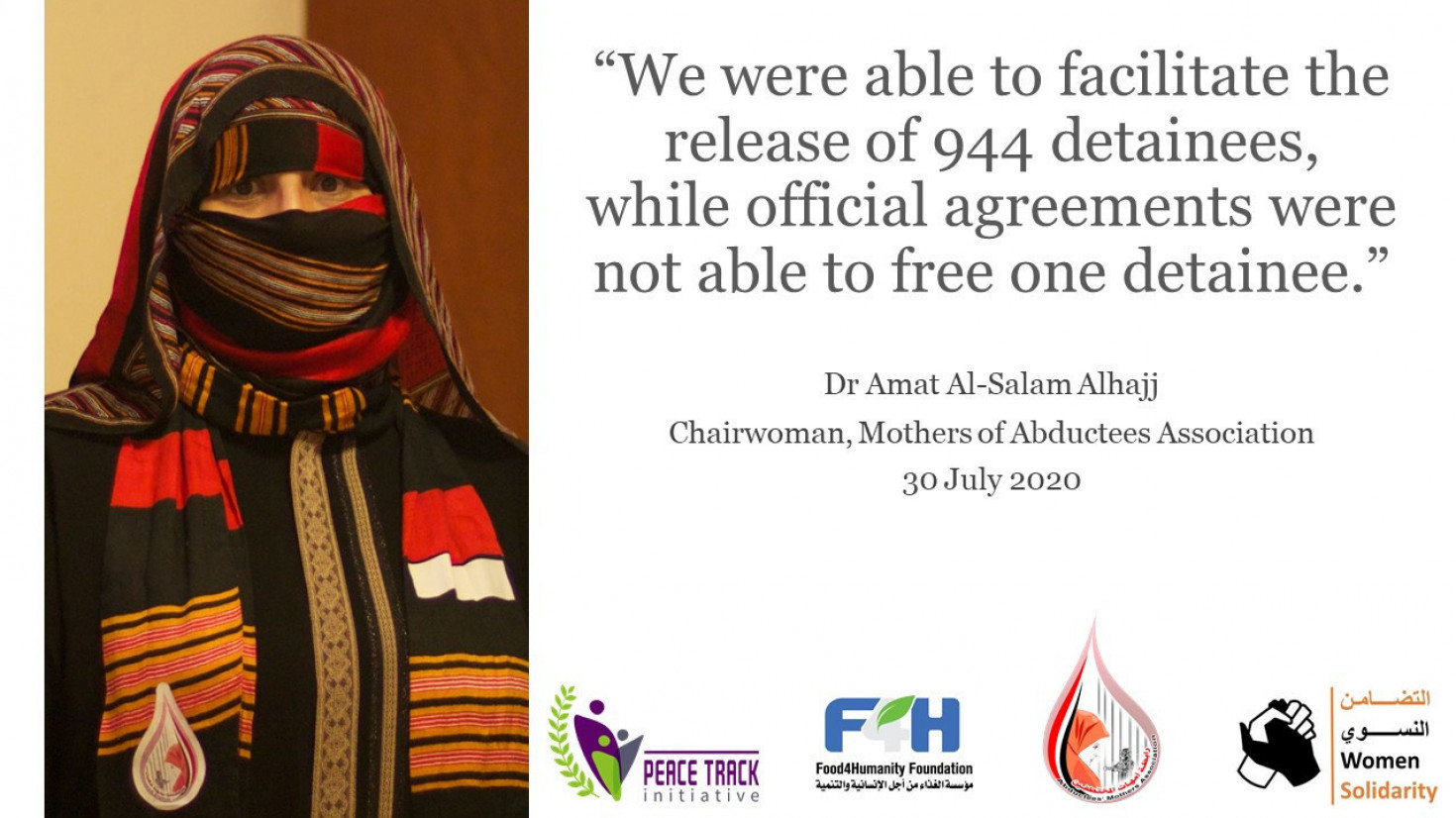 Chairwoman of the Mothers of Abductees Association

Thank you for taking the time to hear our brief today, on behalf of The Mothers of Abductees Association, Food for Humanity, and Peace Track Initiative, members of the Women Solidarity Network.

In my brief I will focus on 3 points:

The first is on the issue of detainees including women detainees, the second is on the humanitarian situation and response to COVID19 and the third is on the peace process and women's participation.

We are a group of Yemeni mothers who have devoted our efforts since the war in Yemen to defend the rights of detainees. Since our establishment, we organized 249 demonstrations to call for the release of detainees. We have shared the heartbreak of mothers on a daily basis as we stood in front of prison gates enduring violence and harsh conditions without any protection. We were able to facilitate the release of 944 detainees, while official agreements were not able to free one detainee. We have advised on the importance of making a distinction between arbitrary detained civilians and prisoners of war, and to make this issue a humanitarian issue rather than a political one, as well as, to pressure the parties to release civilian detainees without any conditions and in response to protect the detainees from the outbreak of COVID-19.

One of the most difficult moments for us, is to witness the death of a number of mothers before they are reunited with their sons, and the burial of their sons who died because of the conditions of detention and torture without being able to rejoin their mothers.

We regret that the UN Envoy jumps to celebrate the promises of elusive parties to release the detainees and doesn’t hold them accountable when they don’t implement their promises.  For example, we are yet to see the Houthi group promise to release the Baha’is materialize.

I also would also like to share with you the catastrophic humanitarian deterioration in Yemen due to the repercussions of the continued war, the spread of diseases and deadly outbreaks, including Covid19, in addition to, the floods that destroyed entire villages in several governorates in Yemen, and destroyed the remaining infrastructure not destroyed by the war. Additionally, Yemeni people are enduring harsh economic conditions including not receiving their salaries for years now. While on the other hand, the humanitarian response is failing Yemenis as it has been ineffective, suffering from corruption, diversion of aid, and excluding to women led organizations.

Yemeni women were at the front lines to lead on the response to COVID-19 pandemic. The women's calls to stop the war preceded the global call. The women focused their efforts to support the limited medical centers and laboratories, provided protection equipment for doctors, held awareness-raising campaigns to promote disease prevention, and provided food and health care.

As for the participation of women, we as feminist organizations, want to express our disappointment due to the continuous exclusion of women in the peace process. The UN Envoy’s current approaches to including women do not meet our aspirations and sacrifices as they continue to be symbolic and not meaningful.

In conclusion, we call on the UNSC and international community to seriously stand with us in exerting pressure for the immediate ceasefire, obligate all parties to release civilian detainees, demand restructuring and reform of the humanitarian response programs, oblige the parties to facilitate humanitarian access, support real and meaningful  participation of Yemeni women by no less than 50%, and provide flexible funding to women-led organizations in Yemen. It is time to turn words into action and save Yemen.

Thank you for listening!